I’ve been working on and off on sewing a top using fabric I bought in a sale a few years back without a plan other than I’d use it to try and teach myself how to sew. I bought three lots of fabric in that sale and have made simple tops with two of them, neither of which turned out brilliantly but I’m learning. They don’t have sleeves so this is my first attempt at sleeves. I haven’t got as far as the sleeves yet… first I had to do a ‘facing’ for the first time. There could be a long-term problem with this top because you were supposed to cut the facing piece against the grain and I didn’t have enough fabric, nor could I find it on sale anywhere. I tried buying a contrasting piece but when the fabric came it was the wrong shade of red so I’ve given up and am just making it, thinking I can use it as a prototype or practise piece, because it’s unlikely to work out according to plan anyway.

Here it is so far. I’m working on it slowly because finding time is a problem, I’m working on the allotment during daylight hours at weekends and the sewing machine and tv are in the same room so evenings if husband’s watching TV I don’t like to start noisy sewing (though he doesn’t vocalise an objection I still feel bad). Anyway, there you go. 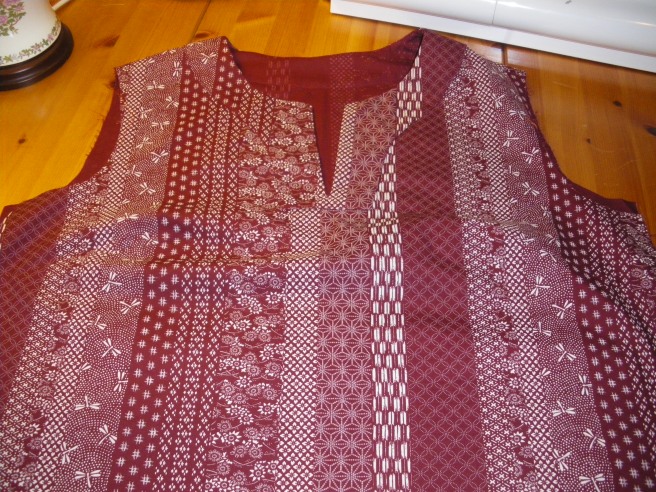 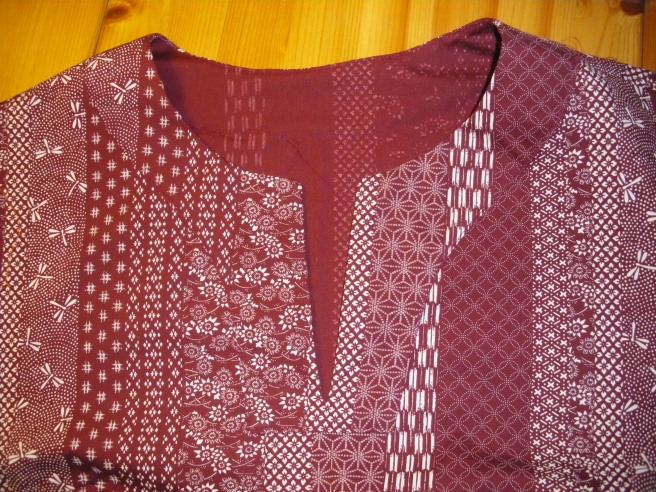 I find seeing where the stitching’s going difficult when sewing close to the edge so had a couple of pull-out moments and the sewing’s in two parts.

Knitting’s going okay. I finished one side of the neck in the annoying lace-knight cable jumper. Second side of the neck you’re supposed to rejoin yarn with right side facing, but the end where the yarn is it would have to be joined wrong side facing, so again I need to concentrate on it. The acrylic mix self-striping one’s racing along although I don’t love the mustard yellow: 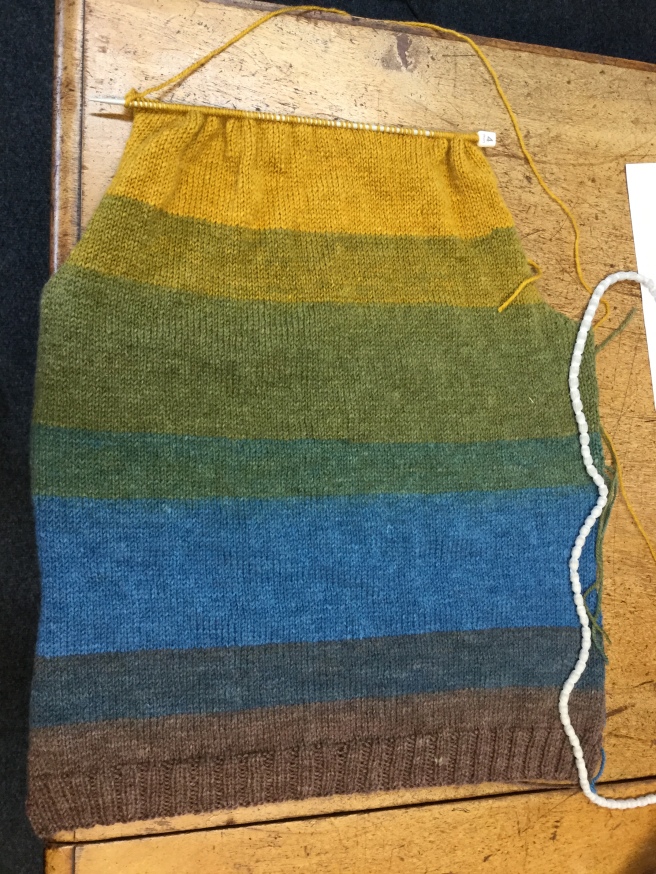 I had great fun at the weekend trying to list my ‘stash’ on Ravelry (it’s still not all there!) and breathed a huge sigh of relief at finding the pattern I decided a long time ago I wanted to use for the Rowan Calmer yarn I bought at a Knitting and Stitching Show. That was one colour and the pattern I found has two more colours and I remember spending ages searching the internet to find some contrasting yarn – and of course having to pay full price and so counteracting the effect of buying yarn cheaply at the Show – so it would have been a pain to have lost the pattern.

The allotment’s doing well though we’ve had problems bringing on squash from seed this year for some reason, don’t know why. Also, May’s had some cold snaps which delayed when I could plant them out. We’ve made a new flower bed this year (a long and narrow one with rose bushes in it, the one with the lovely magenta alliums here we made last year). In the new bed we’ve planted a combination of plants grown from seed indoors and some sown where they are to flower – I’m looking forward to seeing how they come on, we’re just getting to the stage where it’s possible to tell which are weeds and which are wannabe flowers! 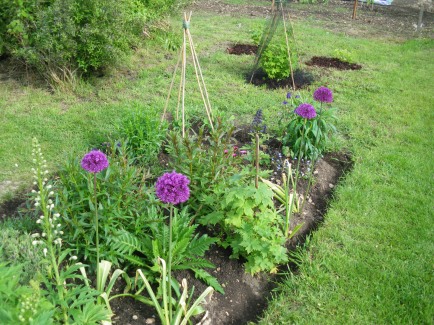 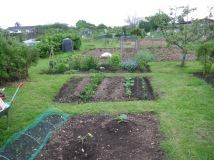 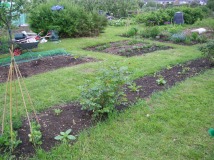