I bought this cross stitch kit 2 jobs and 2 parts of the UK ago, when I was living and working in Scotland. I remember it was 2005 when I started it because I took it with me on a research trip to Oxford and London, staying in what turned out to be the mankiest B&B in Oxford to see a manuscript in the Bodleian and getting the train to London some days to see some manuscripts in the British Library. It was 2 weeks after the July 7 bombing in London and on the day when I went to the BL I’d planned to meet my now-husband there after he’d been to renew his South African passport (he’s sort-of dual citizenship, long story), but then in the Library this tannoy annoucement came on saying there’d been an ‘incident’ and everything was in lockdown. Later we knew it was an attempted bombing on public transport but the detonators hadn’t gone off, or something along those lines, but I didn’t know that then. I couldn’t get him on his mobile and was so frightened, and weirdly for me, angry. It was all that time ago and I still remember feeling so furious, that these people, whoever they were, saw fit to mess about with our lives like that and kill people for whatever their mad ideologies are. I’d no idea I’d feel like that, but really, if you’d presented me with one of them in front of me I’d have punched them in the face, and that really isn’t like me, I was quite scared of how angry I felt. Later it turned out that he was still in the embassy, even though they were due to shut at lunch and it was after lunch so  I thought he was wandering around the streets being blown up, but in fact they closed then but kept everyone who’d been in the queue in the building with their mobiles off, hence I couldn’t get him. Anyhow, all was well that ended well, for us anyway, but that is why I’m so sure I started this is 2005!

Before I learned patchwork I loved cross stitch, even knowing it’s like painting by numbers, but I was really into it! It was a question of finding nice kits that didn’t involve wolves, Yorkshire Terriers, or cartoon characters that was the problem. I liked this cushion cover as I liked elephants (who doesn’t?) and liked the geometric colourful design. 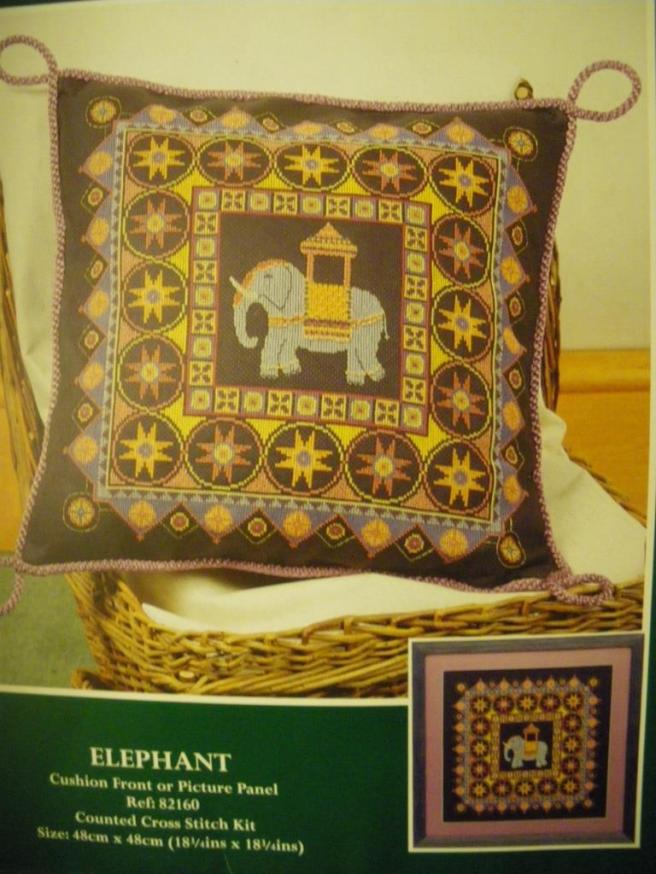 I struggled with the 3/4 stitches, not being entirely sure what they were, and the instructions as is usual being opaque, so the stitches on the outline of the head looked jagged. I put it to one side and it was years before I took it up again.

I know I re-started it in this flat (the one we’re about to leave), so sometime in the last 5 years. I ended up taking out what I’d done and starting again. The outline still looked awkward so I added an extra layer of quarter stitches so it was smooth and was much happier with it. That may be the first step in moving away from instructions and being more confident.

I finished the elephant and the gold stitching on it, then disaster struck. I came home from work one night, took up my stitching, and saw singe marks and a hole in the fabric. Not in the elephant, fortunately, but in the unstitched fabric nearby. I couldn’t work it out. My husband was at home that day and said at some point he’d smelled smoke but coming through to the sitting room couldn’t see anything and assumed it was someone outside with a garden bonfire. Eventually I realised it must have been the magnifying glass that came with the stand I was using. I know it sounds stupid, but it had never occurred to me that it was a fire hazard. If you’d asked me what would happen if you took a magnifying glass outside on a sunny day and left it on the grass I would tell you it might set fire to the grass, but whether because the ‘glass’ was plastic, or because it wasn’t next to the window but more towards the centre of the room I don’t know, but either way it never entered my head. And yes, I know, I’m lucky the place didn’t burn down. Trust me, I’m aware of that!

So the plan with the elephant now was that I’d cut around it and sew it, applique style, to another Aida background. I like purple and as the existing background was navy blue thought it would work. I found only one website selling purple Aida, so felt lucky there. I used interfacing for the first time, not having heard of or used it before, I think I was looking up how to fix cross stitch to a background on the internet. I did realise I couldn’t use the original pattern exactly because sizings had changed, so made the square around the elephant smaller. The filling of the square was almost the last thing I did, however.

I decided I wasn’t so keen on the colours in the original pattern so would make up my own, more vibrant and with less in the way of coral and a light yellow. You can imagine how well that went! Not sure I love the end result, the yellow and orange are really block-y, despite me putting in some mixed orange threads to add depth, but you really can’t see it. Hate to say it, but I think the original was better. My future does not lie in cross stitch design.

Believe it or not, I put a lot of effort into the colour combinations for the outer-edge circles.

I like the self-striping threads, seen here on the big orange corner star and background to the outer circle with the purple spokes, and on the pale blue / purple triangles. In some ways it felt like a cop-out when I was trying to choose colours, but they worked well for me!

I had to design the in-fill for the square around the elephant. This turned out to be really hard because the original was deeper whereas mine was only 5 stitches deep and I couldn’t design a pattern that started where it left off. Turns out my re-design was 89 stitches: a prime number! No wonder I couldn’t get a pattern to work. I spent ages coming with an option that would do the job. Here are my jottings:

Last decision was where to put the gold outline threads. I’d already decided around the inner square but thought I’d put dark pink around the outside square but that didn’t look right so I chose the gold. I hate the stuff, it tends to get tied up at the back of the work and you get one end a lot longer than the other, but there you go.

I was delighted to finish it, and last weekend sewed the back on. I don’t love it, my orange and yellow is too bold, but I did my best and will keep it. In an ideal, imaginary world we’d share it with friends and family and make no more fuss, but we’ll see what happens. 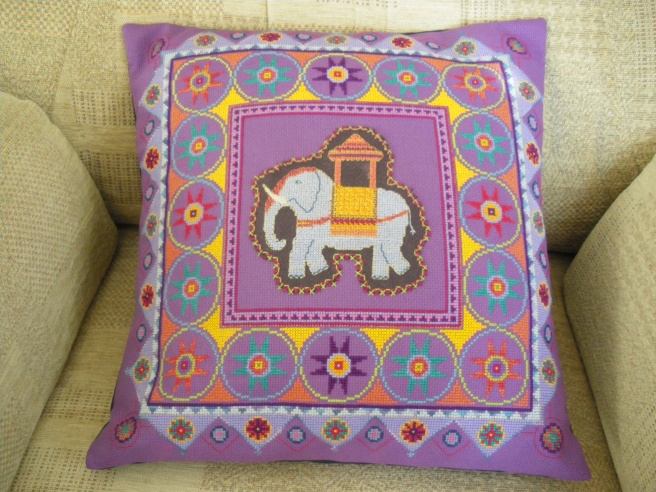 We’ve spent almost the whole weekend packing and sorting, except when I had driving lesson yesterday and church today, with a hurried 30-min walk while dinner in oven (and husband at home, not leaving hot oven unsupervised). Life is one giant box! Tomorrow I have a reception to go to after work. A pain to take clothes and shoes to work for it, and last year was the first year I found people to talk to; I’m not a natural mingler.

There’s maybe too much purple background on show but I can’t say how pleased I am to have finished it at last!