I finished quilting the front of the big square pillowcase on Sunday (not Saturday as I’d intended!) and am pleased with the result. I’ve wanted to try quilting lines parallel to the seams of the square patches for a while, but the first time I tried it was a disaster, so my skills with the sewing machine must have improved – that, and getting a quilting foot. I can’t do a few backward stitches to anchor it like you’re supposed to because I find it hard to see exactly where the needle is and I don’t want to overshoot the edges, so I sew them all in by hand which is time-consuming.

I was inspired by (i.e. copied) the quilting on a quilt I bought from a catalogue years ago, before I started doing patchwork, but for various reasons only brought out of its packet this year after we moved house. It’s lovely shades of green and yellow with a little bit of white and blue floral mixed in, and has squares in the middle then strips round the outside. That quilting pattern is the squares-within-the-squares thing then parallel lines around the edges where the strips are, so I put two parallel lines round my mitred borders. I decided they’d be too close together if I made them equidistant, but that one line only would look daft, so the space between the squares and the first line is 6/8 inch like the lines within the squares, then the outermost line is 1/2 inch from that.

The second photo is of the back of the quilting because you can see the pattern more clearly. You can also see where I’ve got threads that still need to be sewn in!

Sorry if the blue background looks odd, I took it outside to photograph because the light’s better and needed something to keep the item off the ground, and this is all I had to hand. Taking it outside has actually made it look over-exposed; the colours are darker / brighter in real life, more like in my previous post. But I’m no photographer! 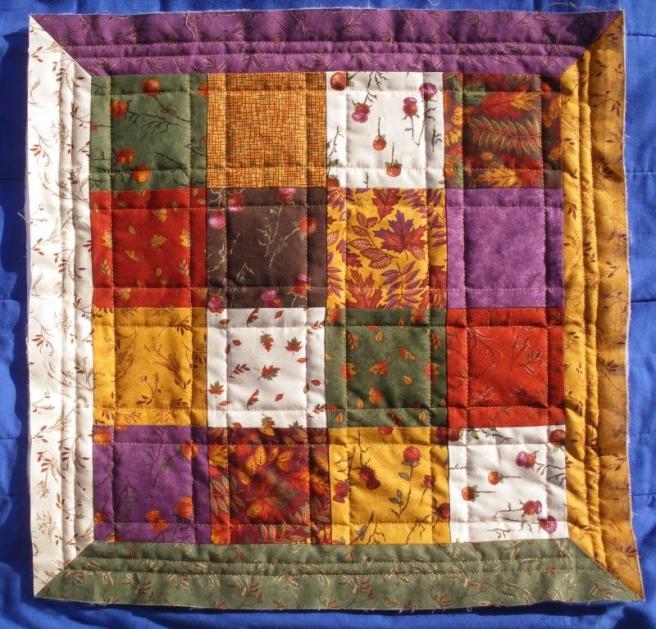 Next step is to finish sewing the ends in then to sew the front to the two back pieces. Before I do that I also need to hem the edges of the back pieces where they overlap for the pillow to be inserted.

I’ve been working on a 22 inch square pillowcase, to replace a shop bought one I got years ago that has fallen apart. I chose this fabric because I wanted the brown leaf fabric for my autumn quilt but it sold out before it hit the shops here so the only way I could get some was in a charm pack, and this is how I chose to use the rest of the charm pack. There are some fabrics in it I wouldn’t have chosen myself, but of course they work as part of the whole – and those I was least keen on are going to be inside the flap on the back! I loved using the pre-cut squares and not having to choose for myself which colours to put together; would have been better if I’d done that with the still unfinished autumn quilt! I have added a mitred border and had to buy fat quarters for that.

Anyway, today is quilting day. I finished the front the week before last, made the two back pieces over the long weekend (except two mitred corners that I did yesterday), and today is for quilting the front. Here goes!

Lower back (to go inside flap)