I finished the first of these a few weeks ago but wanted to wait til I’d done two before posting them here. The one with the pumpkins is much the nicer of the two. 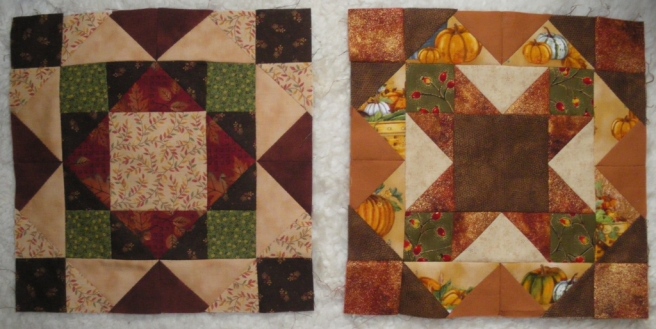 The first one is all riggghhht, I suppose, but not wildly enthused, I’d pre-cut the central square literally years ago and wanted to use it and the 8 matching triangles I’d salvaged from other blocks I’d taken apart, as it’s discontinued. I don’t even know what brand it is, I got it from ebay years back. It should be a good blender fabric, with the red and green, but for some reason I struggled to match it to my stash. 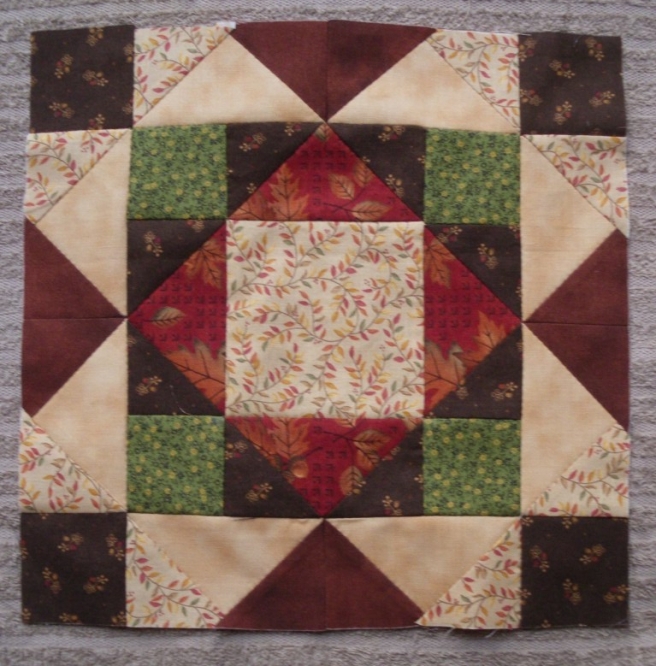 The dithering over the best colours to use was phenomenal! Lots of variations and photos (below) – at first I was convinced I needed the dark orange fabric in it, but it looks terrible next to the browns. Some of these are really yucky! I also tried different tan background fabrics for the outer flying geese before settling on the plain, even though it’s so close to the base colour of the small leafy fabric. Looking now at the slideshow, there’s one I sort-of wish I’d made instead, but I’m not changing it now!

With the pumpkin one, I was really only stuck over whether to use the green rosehips metallic fabric or a darker green leafy one, but I think this turned out for the best. (It isn’t really that curved, I laid it on a small seat next to the window because it was the only place indoors I could get any light, and the chair seat curves down at the front). The brown fabric is one my husband kindly bought me a couple of years ago when a fabric sale came to our village when I was away. Given that he’s colour-blind and it’s not traditionally seen as a ‘man’ thing to do (one of the sellers asked him if he makes shirts!) I think it was good of him. I hadn’t meant for him to try to find autumn fabric, I’d specifically said to get something he liked with the mad idea of challenging myself to make something in colourways I wouldn’t myself have chosen, but instead he bought things he thought I’d like for my project. I confess however I didn’t really like this brown fabric, but am glad I’ve used it here now, it looks fine and it would be a shame not have used it when he’d gone to the trouble. He bought one in the same pattern but green but I couldn’t use it in this quilt, it’s the wrong shade, but one day I must make something for him with it, maybe a pencil case?

It was about a week ago that I finished this but am deeply ‘into’ a jumper I’m knitting myself and little knitted snowman Christmas tree decorations for the Christmas tree festival the church I go to holds in the first week of December, so will need them for the middle – end of November. Also, not only is my husband’s brother’s sister pregnant and due in January, my schoolfriend is expecting in December, so I’d like to make little baby quilts for both of them. It’s in autumn I feel most inspired to design autumn blocks, but will probably have to let it go for now – though having said that, the baby quilts will be made on the sewing machine and the autumn blocks I can handsew on the train, so maybe I’ll do a couple. Except, I thought I’d knit Dad a cardigan for Christmas…