I know, it’s New Year’s Eve and I’m writing about Christmas! I had to wait until after Christmas Day to share this post because it’s about the present I made for my mum, and I didn’t want to spoil the surprise in case she read my blog. A week’s passed since Christmas, and I’ve been trying to finish two projects that for psychological reasons only, I wanted to have finished by the New Year. Haven’t managed either, of course, but one awaits only tassels and the other really only needs another day, so I’m writing this now lest another thing I wanted to do by the New Year isn’t done! Ignoring a pile of ironing in the process, of course.

I started this in October, having seen a fab fabric by Lewis and Irene, featuring farmyard animals which though cartoon versions, were recognisable breeds – belted Galloway cows and Herdwick sheep, for example. My Mum’s a Knitter (capitals intended) and I thought this would be a great fabric with which to make a knitting bag. Plus, I’ve never made a bag before or grappled with lining. I bought the main fabric and another consisting only of sheep, also by Lewis & Irene, from one website; they were discontinued. I got them all from the same manufacturer because I’ve learned the hard way from my autumn quilt that matching fabrics by different designers is hard, not just regarding colour, but also the thickness of the cotton. I wanted a third because the two blended together too much, but on a second website found another featuring pheasants which I really liked, so it had to go in even though it blended a bit, then another that was from a different Lewis and Irene range, with the same theme but with much smaller design elements, more ‘ditsy’, and which had a matching but dark teal background so acted as my contrast.

I bought a pattern from Etsy, though it was for jelly roll strips and I wanted to do squares, so I changed the sizing a bit. I cut strips with help from my husband, who helpfully pointed out that if I just went for it with the farmyard one I’d be cutting off some animal heads! I’ve been known to do that before. I made sure to cut it in the direction that would leave me pieces of the right size for the strip across the top and for straps etc. Then the fun part of cutting squares (I ended up cutting a square-shaped hole in a piece of paper and holding it over the farmyard fabric to make sure I got the best scenes! Followed of course by ages arranging the squares just so.

The squares for the two sides of the bag, sewn together:

I sewed strips across the top, as per the instructions, and decided to make the base from the same fabric as the lining. It’s probably the least exciting of the four fabrics! Then I quilted it, just doing diagonal lines across the squares. Same as I always do, I’ve never been brave enough to try anything else. BUT this  was the first time using the new quilting foot Mum got me last Christmas after the cheap one I bought online first didn’t work well, then broke completely. This one was so much better, definitely a case of ‘you get what you pay for’. Thank you, Mum and Dad!

Getting the squares to meet on the side seams when putting them together after  quilting is hard because you can’t see the squares from the reverse because of the quilt line. I  had one unpick and redo, and it still isn’t perfect, but it’s okay. More annoyingly, I didn’t think to make the outside squares into rectangles, making them wider to accommodate the 3/8 – 1/2 inch seam allowance required for sewing the sides of the bag together rather than the 1/4 inch for patchwork squares, so the quilting doesn’t have continuity at the edges, which looks messy. It would never have been perfect, but it would have been less obvious. 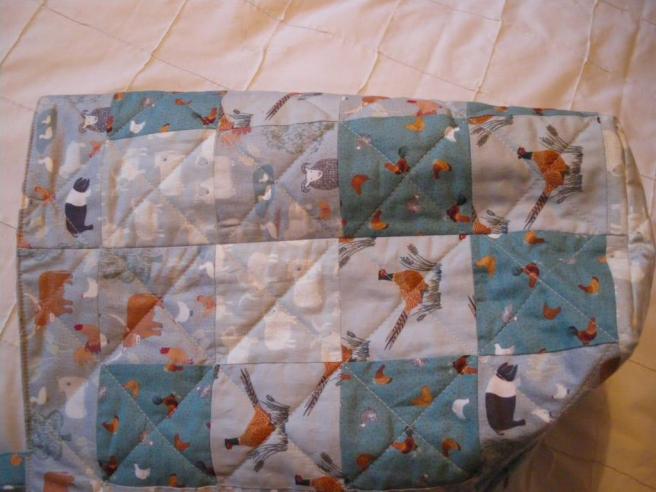 I didn’t have enough fabric to make the lining from a single piece, but it worked out well because using two pieces meant the sheep on each side of the bag could all be facing the right way up! No spacesheep swirling in zero gravity. I had to put a little piece in between the two, just because of the amount of fabric I had, but I think it’s okay. Unfortunately the interfacing I had wasn’t good and I had some problems getting it to stick.

I made the pocket and the straps from the teal background with ditsy-ish hens; sewing a 1/8 inch topstitch down the sides of the straps wasn’t easy and the result a bit wobbly, but when I unpicked the wobbly one quite late at night and redid it, only to then realise it  wasn’t the wobbly one I’d just done but the okay one, I decided to pack that in and just leave it alone. Sewing on the strap ends to the top of the back within a very small seam allowance, as per the instructions as I understood them, means I don’t think it would bear much weight. My attempt at it was messy, but you don’t see it when it’s finished.

I had immense difficulty fathoming out what the instruction for the base of the bag meant. Triangles were involved, and scarily, ‘snipping’ off their points (for ‘snipping’, read ‘hacking off 3 inches of material’). I only worked it out by setting up the bag as it would look when finished and trying various origami-type set-ups til the right one presented itself. Better diagrams in the pattern would have been appreciated. It’s amazing how often I find myself puzzled by pattern instructions; I think that’s where YouTube comes in. Still not sure it’s quite right, unless the edges are meant to have a fold a bit in from where they join the side fabric:

I left a hole in the lining and, again late at night, having sewn around the top of the lining and outer bag, with difficulty, and in a scene less bloody than ones on farming programmes but still reminiscent of calving, pulled the outer bag through the gap in the inner lining. 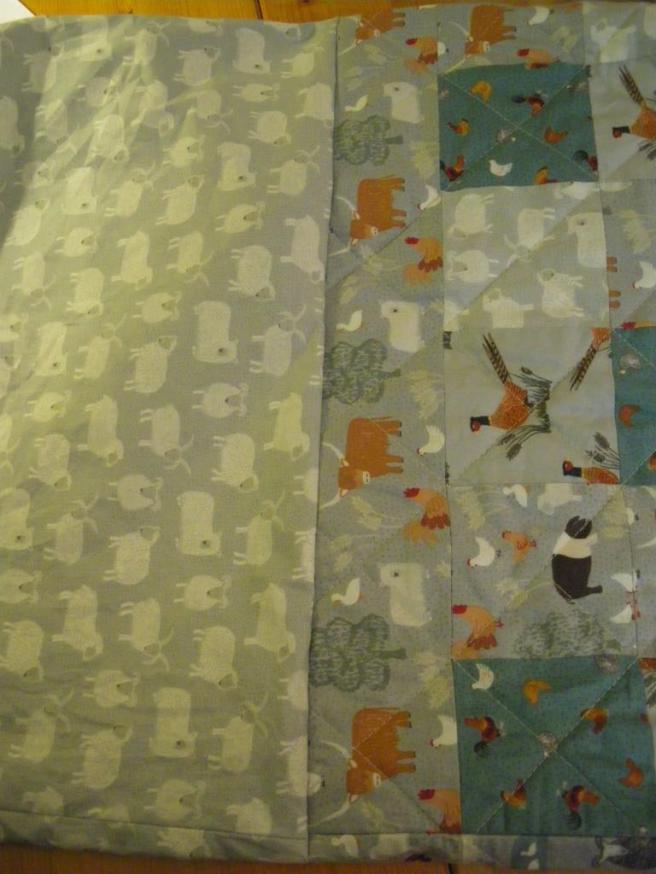 I’d trapped them between the bag and lining. So had to unpick it and do it again. Though I only unpicked the parts where the handles were, tied off the ends, and redid that part, thus avoiding the tricky bit where the side seams of the bag meet. I find sewing circular or tubular shaped things on the sewing machine really hard.

Then after the magical ‘big reveal’ of turning it the right way round, some top stitching to keep it in place, and it was finished. 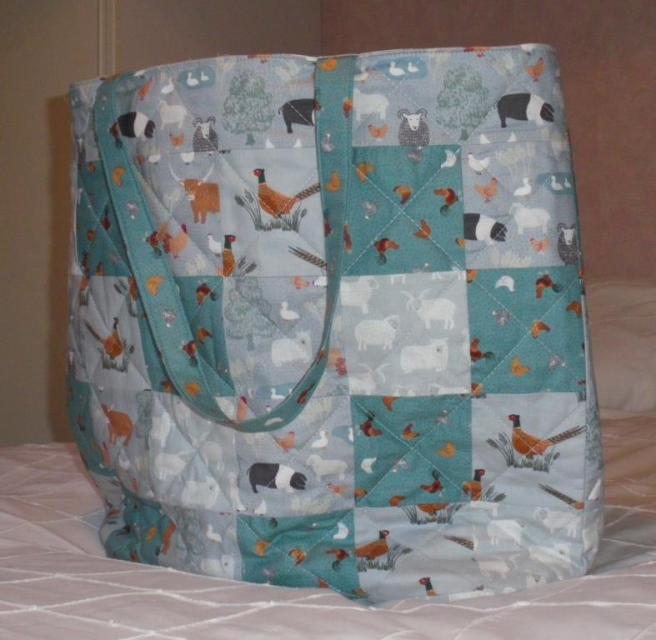 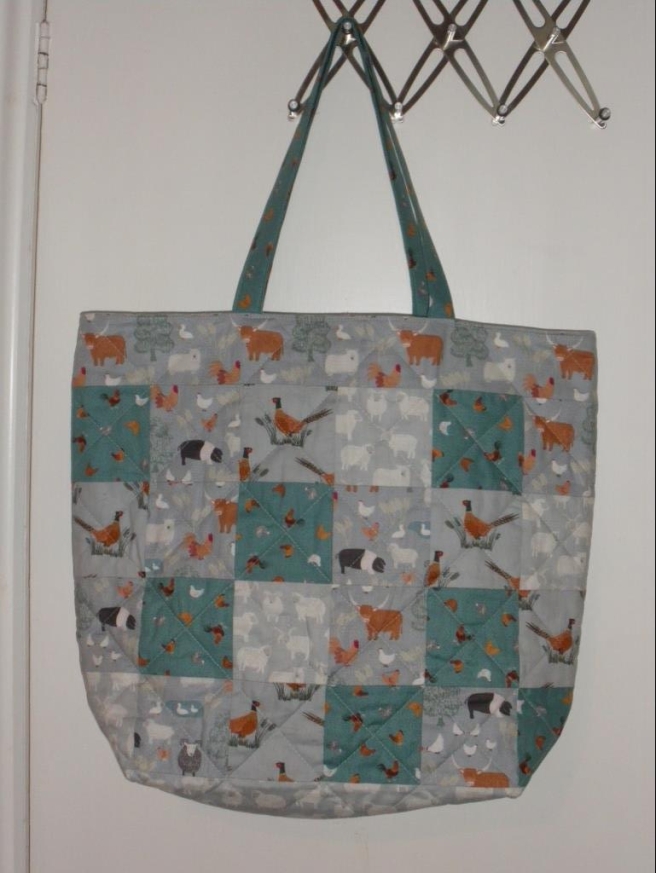 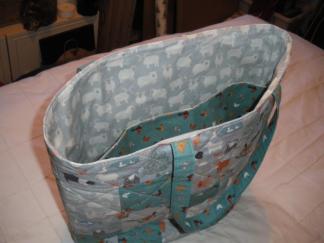 A Happy New Year to all!