At last! There’s a lot that’s ‘wrong’ with it, but it’s still wearable and I’ve learned so much in the process.

I had difficulty finishing the seams and tried to use the overlocking foot but the edges of the fabric in parts got turned in, and the beginning and end of each row got tangled so I ended up doing those bits by hand using blanket stitch. I gave up on other seams and used pinking shears instead, so the inside of the garment is a real mishmash! The two halves of the back don’t line up by a couple of millimetres, it’s not much but it is noticeable if you’re looking – hopefully no one will be! I’ve done my first hem that’s ‘invisible’ from the front, which is just as well as it wobbles all over the place, and my first button loop, which again isn’t the most tidy but you can’t see that when the button’s fastened. So lots of fudging, but lots learned, particularly bias binding. Unfortunately it’s now too cold to wear it this year!

I’ll wait until next year when the memory of all the difficulties has passed before trying to make anything with the other fabric I bought on the same day. At this time of year I’m keen to be getting on with my knitting and the autumn patchwork anyway, as well as some Christmas gifts. 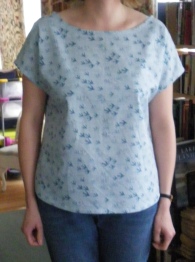 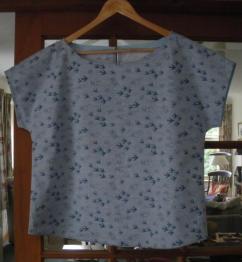 Speaking of the autumn quilt, here is the latest block, using parts of one that I took apart because the colours / patterns didn’t look right; I’d thought when I made it it would be fine, but now I’ve got a decent number of blocks I can see it doesn’t work.

The one on the right below is the one I took apart, it had too many big patterns in it and the small triangles on the flying geese round the centre square were the wrong colour, they just disappear into the other parts. The new one’s not exactly exciting, but I think it looks better because there’s more definition. I’m getting to be very reliant on that brown fabric, don’t know where I’d have been without it. 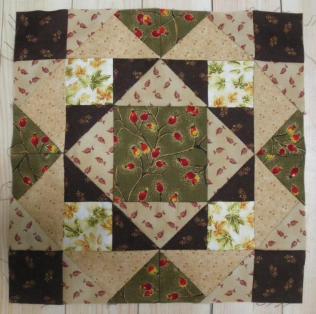 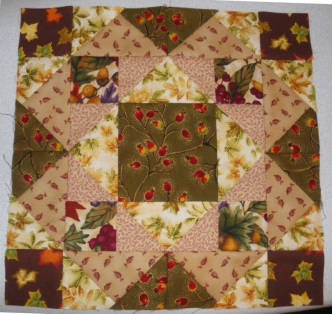 A few weeks ago I made some elderberry syrup for the first time, needless to say having to negotiate nettle patches to get to them, as elders and nettles seem to grow together. It turns out to be quite tasty, more subtle than you’d think; I’d definitely make it again next year.