I finished the jumper made from a self-striping Noro yarn (a silk mix) that I’ve been working on quite fast because I wanted to wear it when the weather cools down, but to be honest am disappointed. The colours are still lovely but I wish I’d made it a size bigger, and all is not well with the neck. I’ve included a photo from the pattern book to show what it should look like, but in reality it’s far too high and I don’t know what I did wrong; I followed the instructions!

Patchwork-wise, I’ve finished another two autumn blocks, and am pleased with the colour combinations on both. I thought the mouse one might be too ‘avocado and aubergine’, but actually it’s fine. On the other one, I wanted to showcase the rosehip fabric, following on from previous blocks when a more heavily patterned fabric stood out against plainer ones, giving a better effect. In the end some of the other fabrics are reasonably heavily patterned, but it’s still okay. The orange fabric is new and the best I could get to be close to the orange in earlier blocks that was more rusty than bright, despite being covered in gold sparkles! 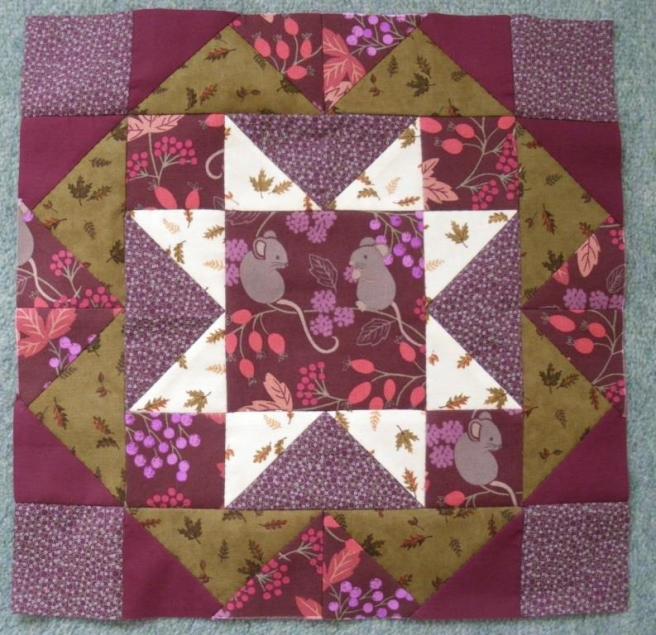 When I finished it I laid out all the blocks I’ll definitely use, and as a whole the quilt is looking much better, though sadly weeding out the unsatisfactory ones leaves only 30 blocks! Sorry the photo’s dark (though it’s really bright sunshine outside) and of course as I’m standing on a chair with the camera stretched out up and in front of me, at a bad angle. 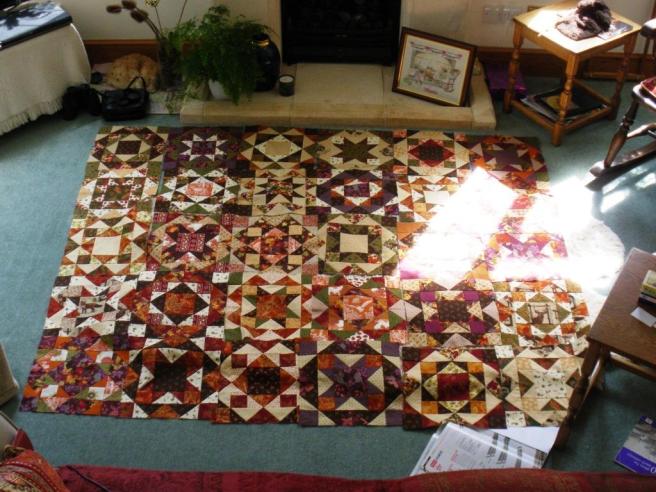 Of the eleven discarded blocks left, I can see how two can be taken apart and some colours changed to make them usable, two won’t be used at all, and of the remaining seven I’ll take some apart and hopefully use some component parts in new blocks, and may keep one or two as they are. It’s a pain, particularly as the awful truth is there are some fabrics I should just never have  bought or used, which is a waste of money as well as time and energy, but there’s no point crying over spilt milk – I can be  more sanguine now I’m happier with the overall project!

We went to Wiltshire on Sunday and stayed for 5 nights, one night in a B&B near Malmesbury and 4 in a self-catering cottage near Salisbury. It’s a county I’d never visited, and am so pleased I went. I wanted to visit some of the sites associated with people I studied in Medieval History, so was really pleased to see Malmesbury Abbey, which was built on the site of an ancient holy place, and Old Sarum, the site of a now-ruined cathedral and castle, as well as Salisbury Cathedral, which was built in the 13th century when the cathedral at Old Sarum was abandoned. But there was so much ancient history, too. You felt it all around you because although Stonehenge is the famous stone circle and we decided not to visit because it is such a tourist hub and so cordoned-off that there might not be much pleasure to be had, there are actually lots of other, ‘smaller’ stone circles too, as well as the white horses etched out of the hillsides which you can see just driving along. We visited the stone circle that runs through the village of Avebury, and although there are only 30-odd of the original c. 150 stones standing, the scale of them is amazing. They reckon the stones were put there in 2600 B.C.! My photos don’t do it justice, but you can see the scale from the ones next to houses and people. 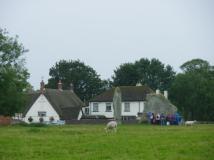 Photos of parts of Malmesbury Abbey:

Stunning gardens at Stourhead, designed in the 18th century (having first diverted a river and dammed some medieval fish ponds, of course!), complete with grottoes and follies. Now owned by the National Trust. Must look fantastic in the autumn!

Lastly, Salisbury Cathedral – great place to see stunning embroidery! I somehow managed to omit taking a photo of the central aisle down the length of the nave, which was very long. There is an incredible font in the centre, commissioned in 2008, with constantly flowing water. The Chapter house dates to 1260 and has an amazing frieze running round it, above the benches were Chapter members sit, carved in stone and showing biblical scenes.