In the last fortnight I’ve finished these two blocks, both of which I’m pleased with design-wise, though when it came to sewing the outside strips to the second one the points were a good 3 mm out so I had to sew below the 1/4 inch seam line I’d pencilled on in order to make them meet, but goodness knows whether that means the block is smaller than it should be, or whether I’d mismeasured the corner squares where the problem lay. 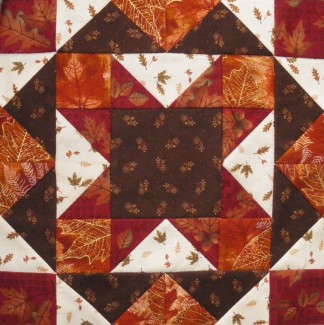 The overall look of it is still too messy and too orange, though I hope improving. (I took this photo from the wrong side as it was the best place to put the step ladders, thinking I could rotate it 180 degrees on the computer, but hadn’t taken perspective into account so am leaving it upside down on screen or it makes one dizzy). I’ve just noticed I’ve made a mistake laying it out because where the bird is the alternating block design has gone awry. It was just to give an idea, so doesn’t matter for these purposes. 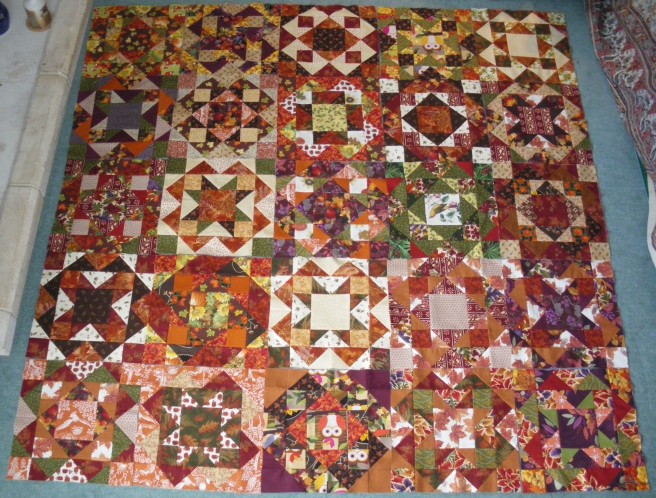 When it comes to the pink quilt for my aunt, I laid out the design last weekend and had made all the pinwheels, but have yet to attempt the scary needle-turn applique. During the week I sewed the first row together. My hope this weekend was to sew together the second row, but I only had the opportunity to start it this morning (Sunday), then hit the plain block that requires the applique shape, so didn’t finish it. I read about how to do the applique and got as far as making the template (traced it from the screen from Wiki-images) before it was time to go and help with the ‘Cream Teas’ at my church, i.e. spending 3 hours drying dishes (phew, it was busy). I’m daunted by the idea of sewing this on while turning under the seam and  putting little cuts in it so it lies flat. My use of the sewing machine to sew the squares together has not been brilliant, I find the start and end of the line of stitching where I’ve gone forwards and backwards to secure it, as per instructions, has left it puckered. I also often go off-course despite best efforts, just slightly but enough for the seam ripper to come out roughly every other seam. 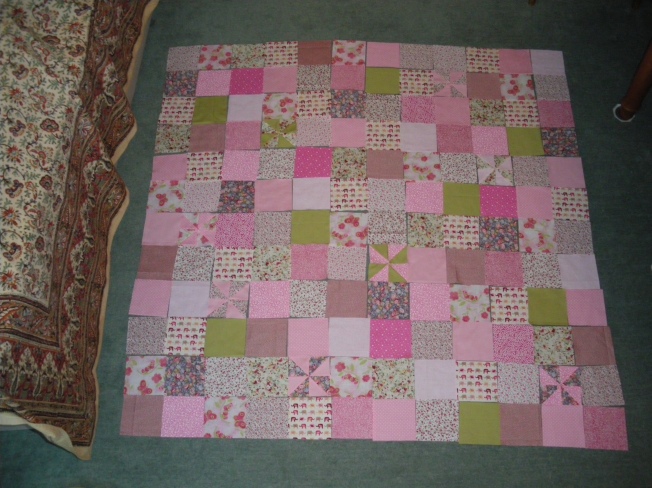 I wanted to have designed the next autumn block but have only done the middle part of one, but it gives me something to work on on the train tomorrow. Finally, I’d intended to finish another 16-row block of the cable knitting I’m doing, as I’m almost finished the back of the jumper, but only managed  6. Over-optimistic as ever. Of course, if I’d got on with it Sat. p.m. instead of sitting glumly contemplating my uselessness after yet another horrendous driving lesson, it would have helped. Between being useless at that, useless at using the sewing machine, having tried to make a cake for today’s Cream Teas but failed because it wouldn’t rise, and not having noted in my work diary a research visitor’s appointment on Friday and being very surprised when this person whom  I’d forgotten about completely  turning up, I was struggling to think of something positive that I can actually do well. Scales still not in my favour, but I’m told  I’m good at drying dishes!