Block number 2 finished… quite pleased with it, though don’t like it as much as the first one. Definitely won’t be placing the two blocks alongside each other in the finished quilt though, as can be seen from picture 2, they definitely clash! Next block is going to be a bit more subdued, to tone it down a bit. This time, will start by choosing the colours of the outside pieces first, rather than working from the inner square out as have done with the first two. I’ve also ordered a bundle of fat quarters in plain autumnal shades, I think that might work well for some of the inside ‘stars’ when placed alongside some of the more heavily patterned fabrics. (A fat quarter is the name for a piece of fabric 45 x 55 cms, a standard  size for quilting fabrics to be sold in). 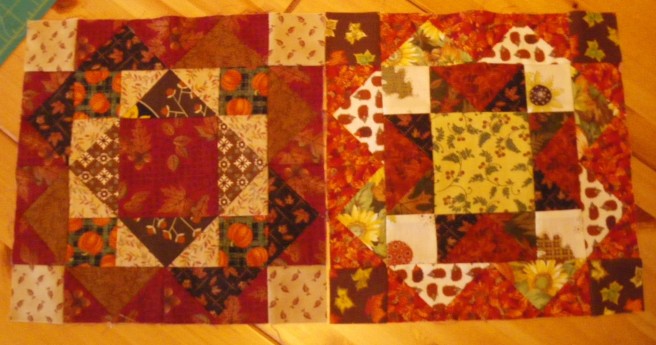